Family mediation services help to cut through the stress, emotion and arguments that often arise - often with good reason - when trying to settle cases that concern relationships such as marriage, civil partnerships and parenthood.

Mediators work carefully and diligently to make sure issues are resolved before they can escalate into insurmountable disagreements, all while offering an unbiased and positive voice on proceedings. In fact, family mediation is so successful that it is now mandatory to at least consider using mediators in most family law cases, including civil partnership dissolution and divorce, as well as cases that affect children and the family’s money. Because of this, it is very likely that you will be required to attend a MIAM before a family law court will even accept your application - and your case may be adjourned if the court is not satisfied that you have had this introductory meeting.

What is the process of family mediation?

Mediation starts with an email or telephone call. Marcia Mediation has offices in central Manchester on Deansgate, and in Altrincham, allowing us to serve clients from across Cheshire and Greater Manchester.

If you’re enquiring about a Mediation Information & Assessment Meeting (MIAM) we can arrange a convenient time for this to take place – either in person or by telephone.

There’s no obligation during our early contact with you, and we’ll make sure you have a timetabled, costed plan for your mediation before we proceed.

In most cases the process is as follows:

Ultimately the main aim of mediation is to make the whole process easier, faster and less stressful.

Sessions can take different forms – you might meet your mediator individually, or together, or in separate rooms with the mediator passing between the two.

This last method is known as ‘shuttle mediation’ and is an effective way to make progress in cases where you prefer not to speak directly or face-to-face with one another.

In family mediation cases involving children, sessions can also be established to talk to the children and find out what they want for the future, including for example where they want to live.

Mediators can even consult grandparents and ensure they are involved in deciding what’s best for their grandchildren – often they can be a valuable additional voice with a slightly more independent perspective.

How much does it cost?

One major benefit of family mediation is that it typically costs a fraction as much as going directly to court.

A mediation session costs around £700 and many cases can be resolved within three sessions, at a total cost of about £2,100.

While some cases are more complex, it’s worth remembering that the savings made via mediation far outweigh the costs.

Because of this, if your case takes longer to reach a final agreement that can be ratified by the courts, it is likely that doing so via mediation will save you even more, compared with paying for the equivalent amount of court time.

Why does it work?

There are lots of reasons why mediation works. Part of it is down to the Marcia Mediation team, which consists of senior mediators with many successful cases behind them.

It’s a method that has been tried and tested, and can be trusted, backed up by professional training and accreditation – and Marcia Mediation founder Marcia Lister is qualified to deliver this training too.

But it also comes down to the parties involved in the case, whether that’s just the two parties of a divorcing couple, or involves children and grandparents as well.

It goes without saying that in most cases, you are best equipped to make decisions that will affect your lifestyle, finances and family structure for the long-term future.

Mediators respect this by listening to the opinions of everybody involved, and proposing solutions that are fair, unbiased and mutually acceptable.

In doing so, they draw on their training, experience and natural empathy to find the best possible outcome for all concerned, with the minimum of stress, cost and delay.

Crucially, this gives you much more control than if you allow a court to make those same decisions on your behalf – so you get a preferable outcome that also costs you less in time and money, making family mediation a truly win-win scenario.

What issues are discussed?

Managing the family finances is an important issue – so much so that an MIAM is mandatory in family law cases involving finances, even when there are no plans to separate or divorce.

Our team of mediators can work with you to decide on the division of income, savings and assets, while helping to make you aware of what this could mean for your future lifestyle once you are living alone, paying all of your own bills individually, and so on.

Importantly, we have experience of what is acceptable in court, such as preventing any individual party from suffering significant hardship following a separation.

This means we can not only work towards an outcome that is fair for all concerned, but also one that can be ratified in court without any undue delays or additional costs

It’s all too easy to exclude children from the conversation, but a mediator can help you to make sure you agree on arrangements that are best for them and for you.

That can include talking directly with the children – you can trust mediators to do this sensitively, and your children might find it easier to open up if you are not in the room at the time.

All of this makes the role of a mediator incredibly important in cases involving young children, and this is not a responsibility that is taken lightly.

Marcia Mediation’s team consists of experienced senior mediators who have worked on many, many cases where young children were involved.

This gives us a unique ability to put across your child’s voice in a way that can be taken into account alongside the opinions of the adults, and to make sure that they are fairly treated in the final agreement that is reached.

Despite ongoing work by campaign groups, grandparents in England still have very few rights when it comes to their grandchildren during and after divorce proceedings.

This can be very distressing for grandparents who have been closely involved in their grandchildren’s upbringing – and this can range from occasional babysitting to being regular closely involved caregivers.

In cases where it is appropriate to do so, mediators can make sure grandparents are considered when deciding on the future living arrangements of the children.

This may involve speaking directly with the grandparents to find out what they think would be best, or offering an independent opinion as to what might be the best arrangements for access, visits, special occasions like birthdays, and so on.

Mediation is about making sure everybody gets the outcome that is best for them. That might not always include grandparents, but when it does, this is a highly effective way to ensure that their voice is heard in a way that it would not be in court. 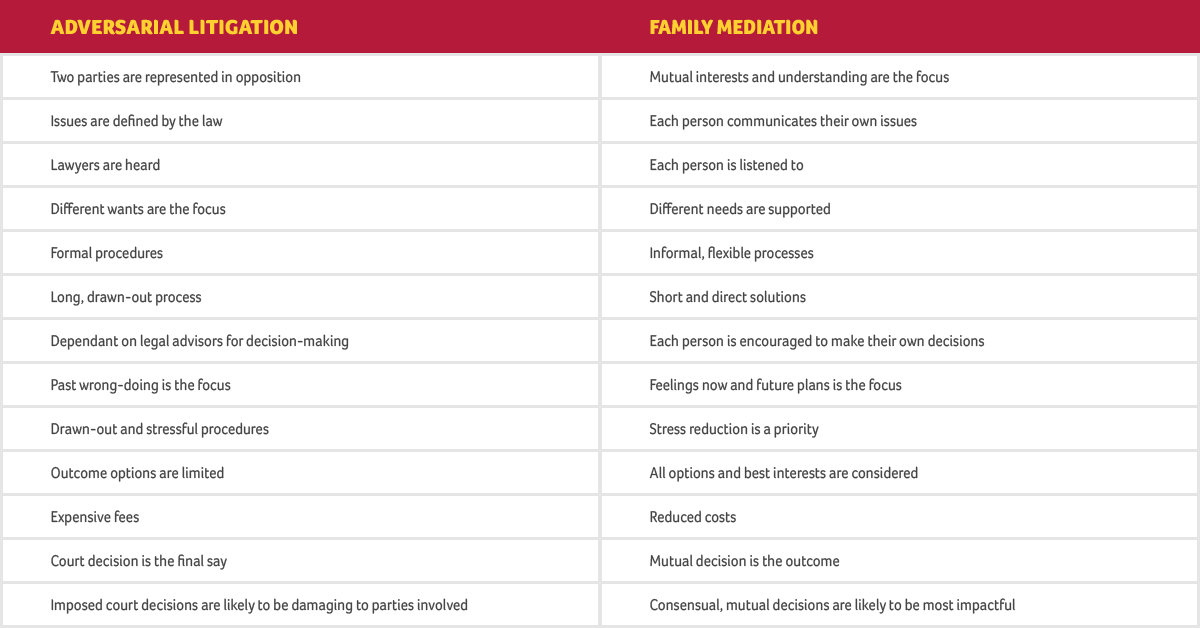 A pioneer for mediation since commencing legal practice as a family solicitor some seventeen years ago, Marcia has worked exclusively as an independent mediator since 2004, focussing initially on family mediation, and latterly on work place mediation.

Get in touch for an initial consultation

By browsing this site you accept cookies used to improve and personalise our services and marketing, and for social activity. Read our privacy and cookie policy for more about what we do with your data, as well as your rights and choices – including how to manage cookies.